This Thanksgiving was slightly different from tradition.  We decided to drive to Tybee Island Thanksgiving evening and spend a relaxing and not so scheduled long weekend (and by “we” I mean Rachel and me) at the beach.

Thursday: we arrive during a full moon and her effects on the water were not lost on mother nature.  Gushes of wind and buckets eventually “trapped” us unknowingly on the little island off the eastern coast of Georgia.  Arriving at our AirBnb we quickly discovered one half the room had electricity, so unless stumbling to a bathroom by moonlight is your thing, we required a service call.  Service was unavailable due to island flooding but we were quickly upgraded to another room where the bed didn’t make you sleep like the letter “w” and a quaint balcony was available for snuggling together under a warm blanket.

Friday:  Breakfast at the Sunrise Cafe was a treat and our sassy waitress straight from Mel’s Diner was a delight serving as our personal meteorologist and outlining how the remainder of the weekend would play out.  Armed with a new knowledge, we relaxed in the room, delving into a continuous conversation about each other.  Simply talking and sharing stories truly builds a bond.

Mission one to find complimentary Christmas decorations was a success and I discovered Rachel’s opinion on the “Everything is $5” model was accurate, although she did humor my 3.5-minute quest in satisfying an inaccurate theory that perhaps a “deal” lay ahead.

Later in the evening we found a local VFW and played BINGO!  It was incredible and although we did not win or hit the $500 jackpot, it was a blast.  I promised Rachel, “if we hit the $500, then we would get all the crab legs she could eat and pay someone to break them open”!  Sadly for team A+R we cracked our own crab legs the next day.  All drinks were served from the finest styrofoam, which I am pretty sure will outlast anything during the zombie apocalypse.

Saturday: Suns out and the tide was high, not a lot of beach due to the rising tide, but we walked and snapped lots of pictures, only after a fueling up at the local coffee.  Walking 3 miles of beach and 50 yards of the pier was a small slice of heaven.  Meeting a man (Mke or Robert…but his mohawk fits neither name) from Rachel’s town and discussing his role with the training center where he was “paid to drink top shelf liquor, get drunk and be evaluated” was a delight.  He quickly informed us that his “one-legged self” would not be surfing in the choppy waters for fear of spinning in a circle.  He introduced us to “Tennessee”, the man running the local bait shop who showcased impressive catches on an i-phone, each image sporting a Tennessee Vols hat.

Afternoon ice-cream was a delight, although the counter girl nor the chocolate served as a treat, we reminisced about our first meeting and eating ice cream on a park bench (we did sit a lot closer this time)!  We walked the beach, took pictures, discussed life and the future.  Rachel was gracious as we departed paradise to watch the Iron Bowl, resulting in a butt whooping for the Barn school.

We purchased our first piece of art from a local “street” vendor, a cute 10-year-old who created a “dog, cat unicorn” and sold this original piece for $1.  We plan to match it with the perfect sand dollar found on the beach as if planted for us to find. 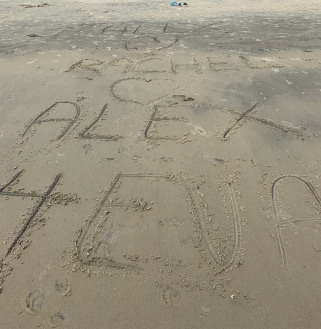 Then to the Escape Room where we laughed at (oh let’s call her Janis) who attempted to derail our Pirate Adventure, passive-aggressively imploring us to work with the only other 2 people in the building on one escape.  As Janis set the room for the other duo, we discovered a near-empty box of wine, a few empty beers, and empty Cheetos bag, which explains the humorous beginning to the night.

It should be noted that the two of us (despite Janis earlier claims to the impossibility of two people standing a chance) escaped the Pirate room with 30 seconds to spare.  Learning how you operate as a team, under the pressures of a clock and narrowly escaping Black Beard teaches you a lot about a partner (and for us this was positive).

Sunday:  Hit our local coffee shop and walked to the beach one last time.  Shot a video promo for an upcoming contest for Revibe and just enjoyed the sea air.  The drive home was full of laughter, talking and just getting to know more about each other.

It was a perfect weekend, filled with laughter and really connecting.  The pictures do not serve justice to the weekend and it’s impossible for words to capture each second of magic.  Until our next adventure…..

We will check back in a few years 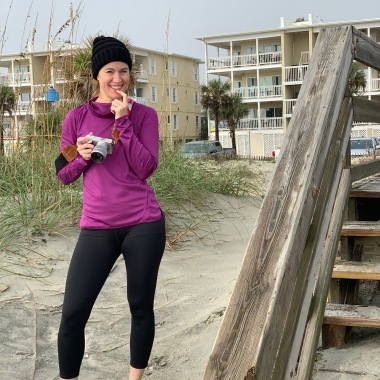 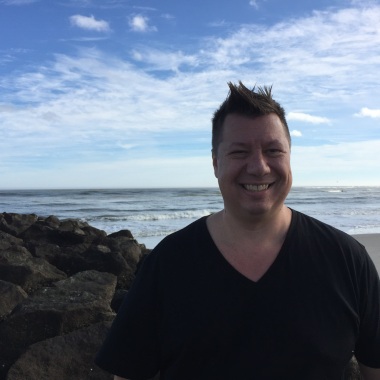 Watch out for the gator behind you

I am a seeker of adventure, peace and happiness. View all posts by Alex Putman